Reaching beyond its walls — and even beyond state and national borders — to rebuild the lives of disaster victims has long been woven into East Alabama Medical Center’s fabric.

In 1991, when an employee lost her husband and her home in a fire, the Opelika, Ala., hospital started a grassroots campaign to fund her funeral expenses and a new place to live, and Cornerstone was born. Through this program, employees could opt to donate a portion of their paychecks — as little as 50 cents a pay period — to disaster relief efforts and hospital employees in need.

“It started as employees helping employees, and it blossomed to the direct community and the southeast region,” says John Atkinson, director of public relations and marketing at EAMC.

The hospital led trips to New Orleans and Mississippi to rebuild homes ravaged by Hurricane Katrina. EAMC sent equipment, supplies, and volunteers throughout Alabama following hurricanes and tornadoes and contributed to hospital associations in Texas and Florida to support hospital employees affected by hurricanes Harvey and Irma. The hospital’s efforts even expanded internationally to include services in the Dominican Republic and orthopedic surgery trips to Ecuador.

On March 3, EAMC found its own community at the center of a disaster when an EF-4 tornado hit Lee County. The tornado destroyed hundreds of homes in the neighboring towns of Beauregard and Smith Station and killed 23 people, including endoscopy nurse Maggie Robinson, who had worked at EAMC for nearly 40 years. 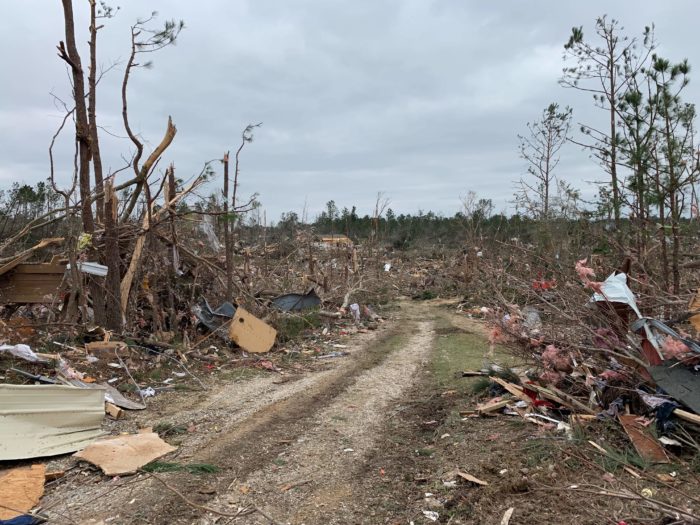 The March 2019 tornado was the worst natural disaster in Lee County history.

“She was such a bright light to not only our hospital, but to our community,” says Laura Eason, EAMC’s director of pastoral care. She remembers Robinson as a “fantastic nurse” with a big smile and positive attitude, even when she’d had a hard day.

In Robinson’s honor, EAMC created the Mend Foundation to support tornado victims with short- and long-term recovery needs. Eason says Mend started as an acronym for Meeting Emergency Needs in Disaster, but hospital leaders soon realized they preferred the word to stand alone, reflecting a holistic approach to restoring mind, body, and spirit. 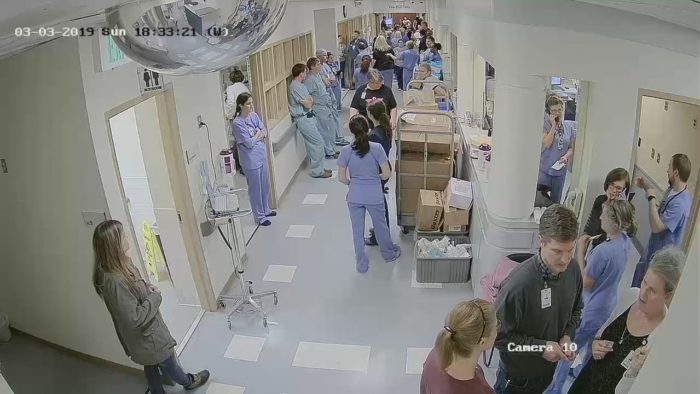 A security camera captured a busy scene at East Alabama Medical Center the evening of March 3.

Mend convened volunteer groups around the county, including Samaritan’s Purse, the Red Cross, and more than 80 faith community groups. The foundation began by tackling the need for housing, providing temporary apartments for 25 families and working with volunteer groups to furnish them.

“They would walk in and just be in awe of what they were seeing, the fact that they had a place to live,” Atkinson says. “The beauty of it is that when the people are able to move out—some already have—they’re able to take everything with them, all the furniture that was in that apartment, to their new home.”

But housing is just the tip of the iceberg.

“It was so much more than rebuilding homes,” Eason says. “It was going to be rebuilding lives.”

And while the road to recovery is long, the community draws on a steadfast support system.

“I think the individuals affected by the tornado have felt the love and support of the entire community,” Eason says. “They’re right there beside them and ready to give them a hand up.”

It’s a priority for EAMC to reach beyond hospital walls, and the hospital’s commitment to its employees and community hasn’t gone unnoticed — it was named one of Fortune magazine’s top 100 places to work in America in 2000 and 2001.