George Kleb, housing and community development director at Bon Secours Baltimore Health System, takes a cue from his clinical colleagues when he suggests one promising way to help many of the hospital’s most costly patients.

“You can’t write a prescription for housing right now, but maybe someday you will be able to,” he says, reflecting on what many essential hospitals have come to understand: Poor health, high costs, crowded emergency departments (EDs), and other health care challenges can be rooted in homelessness. 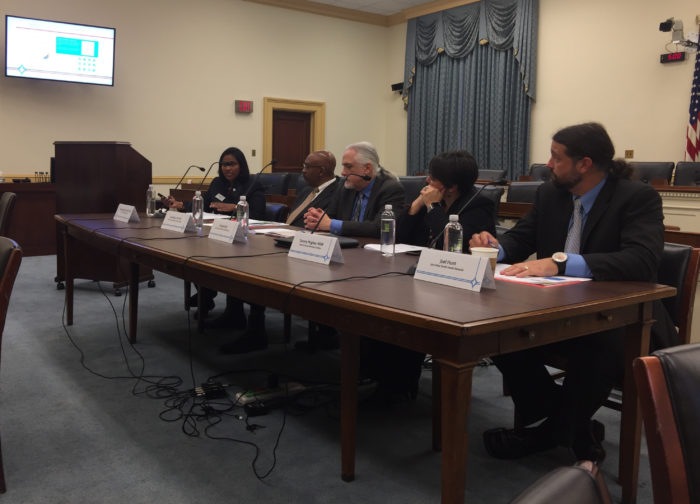 At a Jan. 10 Capitol Hill briefing, representatives from Bon Secours and fellow association member JPS Health Network, in Fort Worth, Texas, shared how they work to improve health care by mitigating the effects of housing instability and homelessness.

Homelessness causes and perpetuates health problems. Living on the street or in a crowded shelter exposes individuals to harsh weather, communicable diseases, and violence. Without a steady diet, a place to bathe, or a safe place to store medication and supplies, homeless people struggle to manage diabetes, asthma, and other chronic conditions, and they often turn to the ED for care. Housing instability also can manifest in other ways, including difficulty paying rent, spending more than half of household income on rent, moving frequently, living in crowded conditions, and sharing living space with friends and relatives.

Bon Secours Baltimore, a nearly century-old health system founded by the Sisters of Bon Secours, has been a pioneer in the “housing as health care” movement. CEO Sam Ross, MD, MS, calls the sisters the original providers of population health, bringing care into the homes of those who need it most. The inner-city hospital opened its first housing development, Hollins Terrace, in 1988 and now operates 728 units in eight locations across the city.

JPS in 2015 launched its housing program, Pathways to Housing, as a joint initiative with the Salvation Army, the Tarrant County Homeless Coalition, and Amerigroup, the largest Medicaid managed care organization in Tarrant County, Texas. The program targets homeless patients with a chronic condition who have used the JPS ED four or more times within a 12-month period. At JPS, just 24 such high-utilizers accounted for more than $900,000 in annual costs.

“I think that’s really invaluable because then you can tailor your treatment and interventions to what exactly is happening at that time, instead of having to wait until something more catastrophic happens and have it be more reactionary,” says Tammy McGhee, MSW, Executive Director of the Tarrant County Homeless Coalition.

The effects go beyond decreased ED visits — participants have reconnected with estranged family and friends and established secure relationships. McGhee recalls one patient with a developmental disability who visited the ED every other day, on average, and showed little improvement after the first few months of the program. But after Pathways to Housing connected him with a local mental health authority, his behavior changed and his ED use dropped significantly.

“It’s a program where you don’t always see instant results,” McGhee says. “These are long-term interventions, where if he would have been on a temporary assistance program of three to six months, it wouldn’t have worked. But because we have permanent supportive housing and keep engaging with folks, it really can affect behavior change when that’s warranted and needed.”

The program is not without challenges. It can be difficult to stay in touch with people experiencing homelessness during the housing qualification and approval process, Hunt says. Funding the program is an added challenge, as Medicaid only reimburses for provider visits, not for other social services the program provides. Still, Pathways to Housing resulted in significant savings for the health network. In its first year, the program housed 14 individuals, resulting in an estimated $417,928 in savings for the health system.

Kleb sees a promising future for a population health approach to reducing homelessness. “If we can effectively use dollars that are being put into health care to provide housing or housing support, that would really open up some possibilities for moving the meter in terms of population health,” he says.

To learn more about how essential hospitals are tackling housing instability and other population health issues, visit essentialcommunities.org.