Essential Hospitals Get Out the Vote

In an ordinary election year, the logistics of voting can be a challenge in communities essential hospitals serve. Research shows poor health and socioeconomic challenges are associated with low civic engagement. The COVID-19 pandemic has created even more barriers to voting by reducing opportunities to register in person at places with community-wide access, such as public events or state motor vehicle departments.

Here are three ways essential hospitals can make a nonpartisan effort to boost voter registration and participation among the patients they serve.

1. Look for ways to engage digitally with patients.

Leaders at Einstein Healthcare Network, in Philadelphia, see civic engagement as vital to the physical health of the patients it serves — especially in Pennsylvania, a historic swing state in national elections.

“As health care organizations who are starting to truly understand the impacts of social determinants of health and the disproportionate impact on low income and minority communities, it is important to our mission in caring for patients that we help them have a voice in how our country keeps all of its citizens healthy,” says Elizabeth Datner, MD, chair of emergency medicine. “Pennsylvania is such an important state in national elections. I thought it was something that made a lot of sense for our community.”

Datner spearheaded the health system’s involvement in the VotER Initiative, a national, nonpartisan campaign to encourage patients to register to vote. Earlier this year, the health system set up tablet computer kiosks in the emergency department (ED) waiting room for patients to register to vote, check their registration status, or request mail-in ballots.

When the COVID-19 pandemic hit, their strategy shifted. Nearly 1,000 Einstein employees have requested VotER badge backers. These placards, which accompany employee ID cards, have a QR code patients can scan with their smartphone to access a voter registration site. 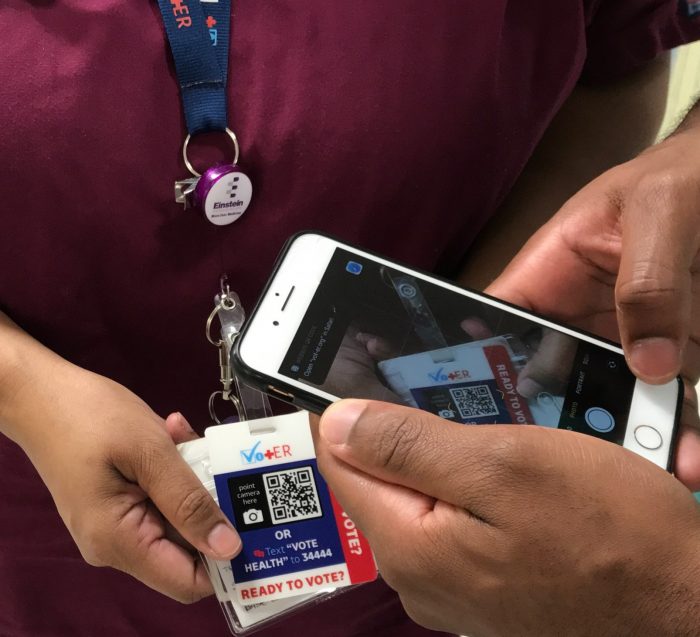 VotER badge backers have a QR code patients can scan with their smartphone to access a voter registration site.

“The things that actually really make up the policies that influence my patients’ health…are political determinants of health, and [they are] influenced by our elected leaders,” says Rebekah Rollston, MD, MPH, a family medicine physician at Cambridge Health Alliance (CHA).

The Cambridge, Mass., health system serves a large population of immigrants, patients who speak languages other than English, and other underrepresented groups. CHA inquires about barriers to voting that these patients might face and helps connect them to resources to mitigate the barriers.

“Is it that you don’t know how to get your mail-in ballot? Is it that you need child care to be able to vote?” Rollston says. “I think as essential hospitals, and especially as publicly funded institutions, it’s really key for us to help our patients as much as possible to overcome those barriers.”

Like Einstein, CHA also uses technology to encourage patients to register to vote. Clinicians implemented a smart phrase into the electronic health record (EHR). Typing the smart phrase triggers the inclusion of a voter registration resource list in the after-visit summary and personal follow-up messages in the patient portal.

Online voter registration is available in 40 states, but it isn’t a solution for everyone. Although Massachusetts has an online voter registration system, registrants must have a current signature on file with the state’s Registry of Motor Vehicles, which can pose a barrier for some patients, Rollston says. So, volunteers from the health system’s social justice coalition set up “Vote for Your Health” tables outside three of its hospital campuses, where they give away face masks and facilitate both paper and online registration. 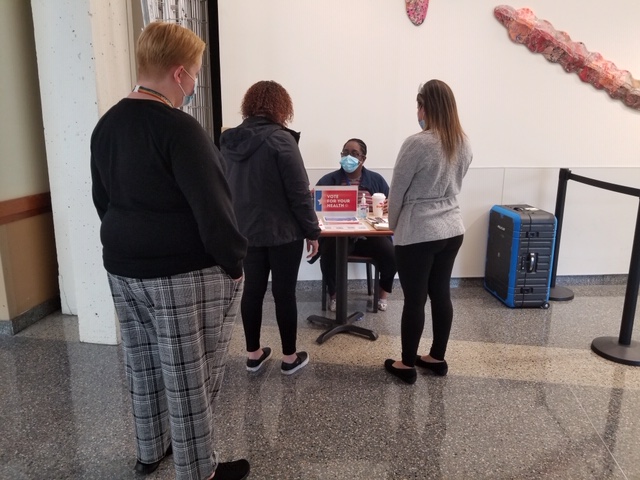 In five days, the health system registered 69 people to vote, and leaders are optimistic the number will grow. “It takes seven touches before someone responds to a call for action,” says Kathy Betts, MPH, director of community health improvement at CHA, who hopes that the tables can be one of those touches.

Through conversations sparked at the tables, volunteers can help identify and mitigate patients’ barriers to voting, debunk myths about voting by mail, and share information about the link between civic engagement and health.

“What was a surprising outcome of our tabling, and maybe shouldn’t have been, was that we are also addressing social isolation and loneliness,” says Betts. “People at the table are never alone, because people are always coming up, and they just want to talk. They want to talk about their day, or their family, or their health. I think our workers at the table feel so satisfied and gratified by that as well, and I think that the patients go away a little happier.”

3. Make sure patients are aware of emergency absentee voting.

While absentee voting is on the rise during the COVID-19 pandemic, some people prefer to vote in person. But what happens when patients are unexpectedly hospitalized in the days before the election?

Kelly Wong, MD, a resident at association member Rhode Island Hospital, noticed during the 2016 election that patients were disappointed that going to the ED prevented them from getting to the polls, and some patients delayed seeking care to make sure they were able to vote. In 2018, Wong founded Patient Voting, a national nonpartisan, nonprofit organization that empowers registered voters who are unexpectedly hospitalized or whose recent hospital discharge prevents them from reaching the polls.

“Being hospitalized is really stressful for the patient and their family, for obvious reasons, no matter when it happens, but worrying about not being able to vote doesn’t need to be an extra thing on their plate,” says Katie Barry, a national medical student coordinator for Patient Voting and medical student at the Warren Alpert Medical School of Brown University, in Providence.

“[We want to make] sure that people who are at risk of not having their voice heard have a chance to vote and have a chance to elect the people that they think are going to do the most good for their communities in addressing the social determinants of health that they face,” Barry says.

While voting is just one component of democratic engagement, it is a powerful way to influence policies affecting health. Is your hospital helping your patients and community members vote? Share your story at dept-comms@essentialhospitals.org.