Chemotherapy can be a long, stressful process for patients and their families. Christiana Care Health System, an essential hospital in Wilmington, Del., has taken a novel approach to helping patients and their loved ones cope with that process: virtual reality (VR).

Donning a VR headset takes patients and caregivers out of the infusion suite and into one of six calming nature scenes, from a rainforest waterfall to an Alpine lake.

“What we usually see as we watch patients are initially a lot of ’oohs and aahs’ as they take in the VR, and typically they then fall into a quieter, in-the-moment mindful experience as they explore the details of the scenes,” says Cynthia Waddington, MSN, RN, AOCN, clinical director of cancer programs at Christiana Care. 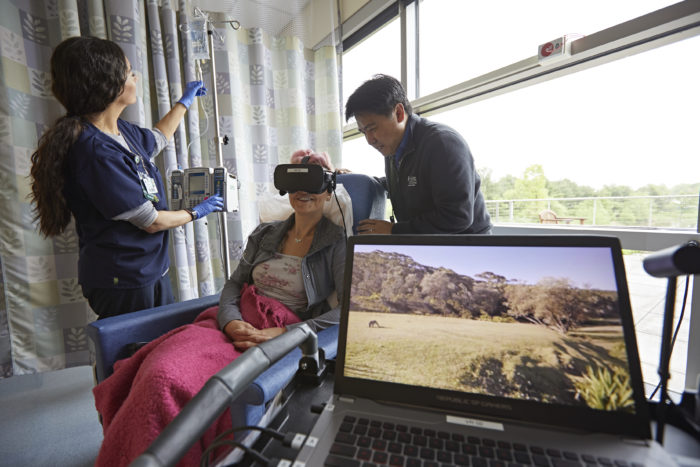 The health system launched the VR program a year and a half ago, when Susan Coffey Kern, MD, director of medical education at Christiana Care’s Virtual Education & Simulation Technology Center, witnessed the discomfort patients and their caregivers felt during chemotherapy at the Helen F. Graham Cancer Center & Research Institute.

Volunteers help patients put on the VR headset, which gives them a 360-degree view of the scene. Others around them can share in the experience by watching what the patient sees on a laptop screen.

Patients report that these intricate worlds help take their mind off their treatment by providing a much-needed distraction. During a pilot study:

Much More than a Distraction

Beyond the numbers, VR also inspires meaningful connections among patients and medical providers. One patient said the winter forest VR scene reminded him of time he spent developing land with his brother in the Pennsylvania mountains, Waddington says. Another patient set a goal to visit the southern coast of Ireland after seeing a VR scene.

“We had a patient who wanted to see Cape May, New Jersey, on VR,” Waddington says. “A member of our Innovation Center team took the 360-degree camera to Cape May, and she and her husband filmed a Cape May VR video for this patient. The patient was thrilled and overwhelmed with the sites of a beautiful place she used to visit with her family.”

The pilot also allowed Innovation Center team members to work more directly with patients and witness the human connections that technology can foster.

“The team felt privileged to be allowed in their world when many are feeling quite vulnerable — it feels as if they are entering into a sacred space with our patients,” Waddington says.

In 2018, Christiana Care’s VR program received the Magnet Prize from the American Nurses Credentialing Corporation, which recognizes organizations with unique, nurse-led programs that transform care delivery. This recognition enables the health system to expand the program through additional video scenes; VR headsets for other hospital units, including inpatient units; and a clinical study to explore the use of educational VR content for first-time chemotherapy patients. Health system leaders will present their findings at the Magnet conference in October.

“Winning this prize gives us yet another way to serve from our core values and behaviors—serving with Love and Excellence,” Waddington says. “We were … amazed at how this technology has provided an avenue to make a very meaningful human connection.”