On a recent Tuesday evening at a community center in north Philadelphia, Tim Bryan, assistant director of emergency medical services at Temple University Hospital, took a shot at acting.

“Now, someone is going to pretend to be hurt and we’re going to act [the scene] out,” Bryan instructed a room of dozens of community members.

The participants were there to learn how to help treat a gunshot victim at the scene of a crime until medical personnel can arrive. 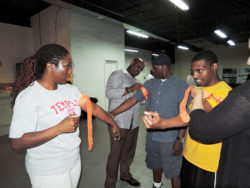 In 2015, more than 1,200 people were shot in Philadelphia. That number could reach 1,500 this year if gun violence continues at the current rate, according to Charles. On average, Temple University Hospital sees more than 400 gunshot victims annually and many cannot be saved by the time they arrive at the trauma center.

“About 50 percent [of the victims] are transported to the hospital by the police,” Charles explains. “There is generally nothing being done for the victim, in terms of addressing the hemorrhage, from the point of injury to the time they arrive at the hospital.”

Fighting Chance aims to increase the likelihood of survival through community intervention prior to the arrival of professional help. Training sessions are hosted throughout the community — at churches, schools, and recreation centers — and attended by adults, as well as children as young as 8.

The two-hour sessions, which emphasize prioritizing personal safety, include education on hemorrhage control, scene management, and makeshift tourniquets. Since the program’s launch earlier this year, the hospital has held eight community training sessions and more than 200 people, including police officers, have participated. Many community members even repeat the training to help train others and improve their own skills.

“The focus of the program is knowledge and empowerment,” Bryan says. “The goal is not just to learn how to stop bleeding and get someone to the hospital. It’s more of a global dialogue and educational experience for everybody.”

Through trainings, hospital staff have gotten to know people they would ordinarily only see in the emergency department.

“The benefit works both ways, and I think it’s an important direction for medicine in general,” Charles says. “It’s not just us coming in like missionaries and saying, ‘Let us help you save yourselves.’ We go out to a community that welcomes us warmly — in their rec centers, where they eat, where they hang out — and we talk.”

Ricardo Rose, a Philadelphia resident and board member of Fighting Chance, goes to trainings to lend support and encouragement to new attendees. “You would think people are going to a rock concert the way they attend these events,” he says.

Rose adds that the friendly atmosphere at training sessions has seeped into people’s everyday interactions. “The conversation in neighborhoods has shifted from who got shot and murdered to how to preserve life. This has enhanced the community in such a way that it’s a totally different neighborhood. People wave at each other now, [and] they assist each other.”

The co-founders plan to expand the program and achieve goals laid out by the Obama administration’s Stop the Bleed campaign. They want to eventually provide bleeding control kits—which include a tourniquet, wound dressing, gauze and gloves—to trained individuals and also place kits in public areas where gun violence is prevalent.