When Cambridge, Mass., youth organized a Black Lives Matter walkout and peacefully marched to Harvard Square last year, they were accompanied by police officers. The officers helped clear out space for the students to conduct their silent protest and then safely escorted them back to school.

A sight like this might be a rarity in many communities given recent events, but not in Cambridge. The amicable relationship between the community and Cambridge police has been helped by the Cambridge Safety Net Collaborative — a unique partnership between the Cambridge Health Alliance (CHA), public schools, and the police department — that serves youth at risk for delinquency.

At the core of the Cambridge Safety Net Collaborative are a handful of school resource officers trained extensively in working with juveniles. The officers are stationed at schools throughout Cambridge. During bimonthly meetings at the police department, the officers present cases of at-risk youth to members of the collaborative. The group discusses and identifies youth in need of clinical, academic, and other services.

The program has made a substantial difference. Since its start in 2007, there has been a 60 percent decline in juvenile arrests, with only one school arrest made between 2013 and 2015.

“The youth in Cambridge feel very comfortable with our officers,” says Lt. Leonard DiPietro of the Cambridge Police Department. “Most importantly, they trust them. They know we’re there to work with them and to help them do the right things.” 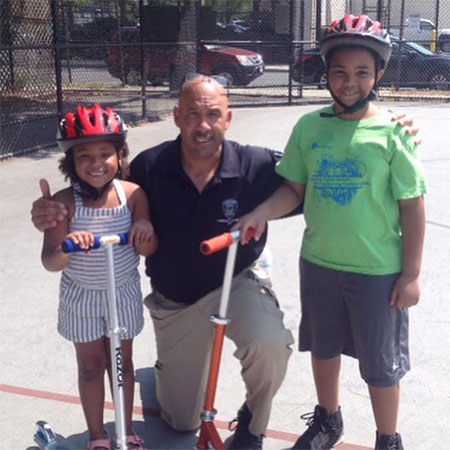 Diversion programs — a form of sentencing that allows criminal offenders to avoid charges — have been a strategy for handling juvenile delinquency for years. Studies show that even one entry into the criminal justice system increases the chance of a repeat offense. But the Cambridge Safety Net Collaborative takes it one step further using case management.

“We want to address the true needs of the youth. There are no hand offs,” DiPietro says. “In the past, if an officer identified a mental health concern, he may hand it off to a psychiatrist. [Now] the officers continue to work with the kids — making sure they go to appointments and seeing how they’re doing after school, out on the streets.”

The cases are referred to the police department by schools, as well as parents seeking help for their children. At each meeting, the officers present cases of about 30 families with children ages 8 to 20. The program, which has received national and international attention, has served about 100 families.

“There can be reluctance on the part of health systems to want to interface with police around issues of confidentiality or fear that working with police may jeopardize their patients being arrested,” says James Barrett, a CHA psychologist who is part of the collaboration. “There’s only so much a hospital can do for an at-risk juvenile. Relationships with law enforcement are critical to keeping these kids safe. If we do it in silos, it’s not going to be as effective.”