Betty McLain relished her work as an activity therapist at a nursing home. She loved interacting with residents and trying to brighten their days. But when she found herself unemployed, McLain began to feel disengaged.

She heard an announcement at church one week about a program that would prepare unemployed people for the workforce, and she applied.

“I was just glad to get up and go out of the house and have something to do, rather than being home … doing nothing, unproductive,” McLain said. “I was ready to get up and go.”

In March 2016, McLain became one of the first graduates of the Hire Newark Employment Ready Boot Camp. A partnership between association member Newark Beth Israel Medical Center and various Newark employers, Hire Newark trains participants over five weeks and places them in jobs with Beth Israel and its partners. These partners include other hospitals — such as Clara Maass Medical Center, Jersey City Medical Center, and University Hospital, in Newark — as well as companies like New Jersey Transit Corporation, Sodexo, PSE&G, and Whole Foods Market.

“It helped me a lot to have more self-esteem about just putting myself out there,” McLain said of the program.

“You just need to understand the culture of the people that you’re serving,” said Atiya Jaha-Rashidi, director of special projects and initiatives at Newark Beth Israel Medical Center. “By engaging our community coaches, it gave more value to the program.”

The program concludes with a community service project and a job fair, where participants interview with employer partners. Each candidate typically walks away with two to three job offers and a year of peer mentorship, Jaha-Rashidi said. 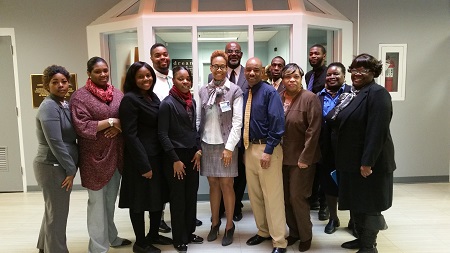 The 16 participants in Hire Newark’s first class graduated in February 2016, and the second class of 20 students graduated in September 2016. Both classes had a 100 percent graduation rate, and 95 percent of participants remain employed, Jaha-Rashidi said. A third class began in April.

“Part of our mission is certainly to be a good neighbor in the community and recognize that we are an economic driver within this community,” said Zachary Lipner, vice president and chief human resources officer at Newark Beth Israel Medical Center and Children’s Hospital of New Jersey. But he sees this outreach as more than a moral duty — it’s a way to empower and enable people to take charge of their health.

“Jobs are a social determinant of health. If we are going to move into a population health model, and we are going to be charged with keeping our communities healthy, people need jobs,” Lipner said. “People who are trying to figure out how to put food on the table because they don’t have a job are not going to spend time taking care of their health.”

For McLain, her new job brings not only financial security, but also an opportunity to uplift others.

“I’m able to do a lot more as far as providing for myself and being able to accomplish things that I didn’t accomplish without the job,” McLain said. “It made me embrace life more, because you’re around people that are sick or feeling bad, and you want them to experience the joy of being alive.”

A Calling to Serve: Strategies to Recruit and Retain Essential Hospital Staff