If sleep were a person, she would be an attractive, flirtatious woman. You would catch a glimpse of her now and then, but she wouldn’t acknowledge you. After your first date, she wouldn’t return your calls.

That’s how one sleep-deprived resident at Hennepin County Medical Center (HCMC), in Minneapolis, put it at a recent seminar led by narrative health expert Syl Jones. The students had been asked to describe sleep as if it were a person. The purpose of the exercise was to teach physicians to better relate to the conditions of their patients, instead of hastily writing a prescription.

Jones, a 64-year-old playwright and journalist, has been a resident fellow at the hospital since June 2015. Using his training from Columbia University and background in the arts, he is planting the seed of narrative medicine—an approach that emphasizes the importance of patient stories in health care—into the minds of students and physicians.

“Illnesses unfold like stories, and they have well-marked and described stages,” Jones says. “If you learn to ‘read’ the various stages, you can often guess what will happen next.”

‘Bringing in the Humanity’

Jones’ 90-minute sessions with interns and residents usually start with him asking the students to reflect on some piece of art— perhaps a photo, movie clip, or music. For example, he might show them an image of a young woman with a multicolored face and ask them how they feel about her. The discussion might transition to their thoughts on how patients perceive them or how to be a more approachable physician.

“It’s crucial for physicians to observe and listen during their initial face-to-face interaction with a patient,” Jones explains. “All illness is a narrative in a sense, and what physicians do is try to intervene in that narrative of the patient—with high-tech scans, machinery, pills—and change it.” 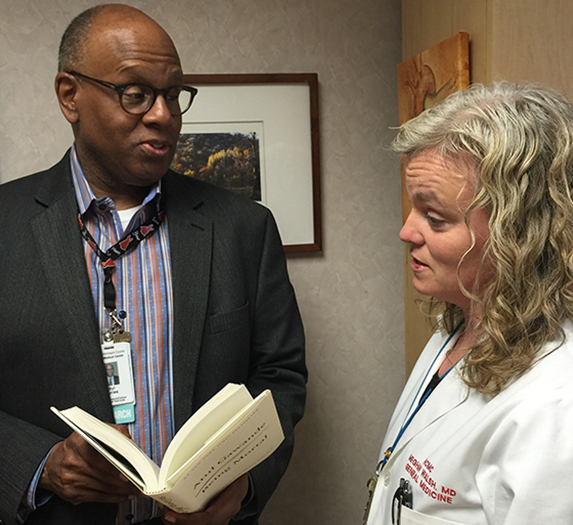 Narrative medicine expert Syl Jones discusses a curriculum for HCMC’s interns and residents with Meghan Walsh, the medical center’s chief academic officer. “If you learn to ‘read the various stages [of illnesses], you can often guess what will happen next,” Jones says.

Narrative medicine is foreign to most of the hospital staff, and Jones knows adopting the concept will take time. The physicians have hectic schedules, and often rush in and out of his sessions. Others lack confidence in their ability to think creatively.

“[Jones] is a breath of fresh air,” says Meghan Walsh, HCMC’s chief academic officer. “We talk all the time about how medical school creates a group of insecure perfectionists [but he is] bringing in the humanity. I just wish all doctors had the time to reflect.”

Like any effective teacher, Jones is calm, patient, a careful listener, and dedicated to helping HCMC physicians break out of their comfort zones.

“It’s baffling when they haven’t spent a lot of time thinking about the human part of what they do,” Jones says. “They deal with patients every day but they’re so focused on the science that they miss a lot of other things.”

He looks for opportunities beyond physician training to inject storytelling into patient care. For instance, he helped podiatrists devise a strategy for creating informative videos about surgical procedures to better prepare patients and reduce the risk of complications.

When he caught wind that the psychiatry department had an upcoming fundraiser, Jones composed a play for the event, showcasing the conflicts of those with mental health issues. He went the extra mile and conducted interviews with patients to accurately capture their experiences.

“The need to understand patient stories at a level I trauma center that’s a safety net hospital is never going away,” Jones stresses. “If we expect to change the way health care is perceived, or change the narrative around what health even is, this is a great place to do it. It makes a lot of sense for me to be here.”