Surgeons at Einstein Medical Center in Philadelphia are using a new device to detect cancer cells during lumpectomies, reducing the risk of repeat operations by up to 50 percent.

The MarginProbe is used on removed breast tissue while a patient is still under anesthesia during an operation. The handheld probe lights up if cancerous cells are found, and information is sent from the probe to a console for analysis. The surgeon then decides whether more tissue needs to be removed before completing the lumpectomy.

“This new radiofrequency technology detects cancer cells within one millimeter of the edge of the tissue and thereby can guide the surgeon to take additional tissue at the time of the initial surgery,” says Lisa Jablon, MD, director of the breast cancer program at Einstein. “[This] is a wonderful advantage for our patients.” 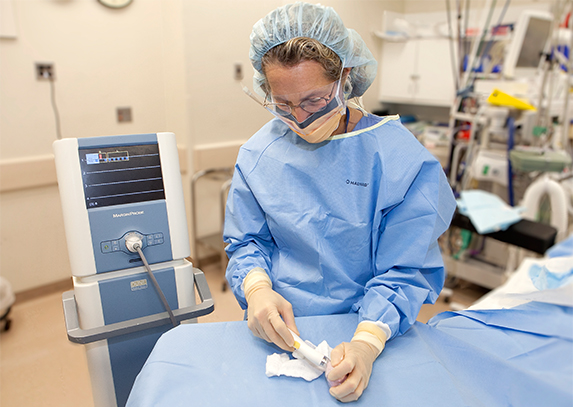 During breast cancer surgery, a surgeon removes a rim of normal tissue around the tumor, called the margin, for testing purposes. Traditionally, surgeons use visual inspection, imaging, and palpation to look for cancerous cells in the marginal tissue, but microscopic cancer cells cannot be detected using these methods. This is why the tissue is sent to pathology for testing, which can take up to a week.

“If cancer is identified close or at a margin after the pathology is studied, many women will need to undergo additional surgery,” Jablon says. “This is very disappointing for those facing this situation, adding time, stress, and cost to their care.”

Einstein is the first hospital in Philadelphia to offer this technology as a part of a pilot program. The U.S. Food and Drug Administration approved the device in 2012, but it still is rarely used in hospitals due to high costs and insurance companies’ hesitation to pay for the new technology.

One Step at a Time: Nashville General Helps Patients Manage Their Own Health