It’s not every day that a young doctor in an underserved city becomes a national hero. But that’s what happened to 39-year-old Mona Hanna-Attisha, MD, MPH, of Hurley Medical Center in Flint, Michigan.

For nearly two years, Flint residents had been complaining about the quality of the city’s water, only to be falsely reassured by the government that it was safe to drink. In late August 2015, a study by researchers at Virginia Tech raised alarm: 90 percent of water samples collected from Flint homes revealed dangerously high lead levels.

That’s when Hurley pediatrician and Michigan State University (MSU) professor Hanna-Attisha sprung to action. She felt compelled to prove that the city’s children were being exposed to the toxic metal.

When pediatricians hear the word lead, they panic. Children under age 6 are highly prone to lead poisoning because they absorb more of it than adults, and the metal can irreversibly affect their mental and physical development. The toxic substance is capable of damaging multiple organ systems, and it has been linked to attention-deficit hyperactivity disorder symptoms and a decrease in IQ.

Upon entering the body, lead either goes into the bloodstream or gets stored in the bones. Certain circumstances — such as poor nutrition, stress, and pregnancy — can cause it to come back into the bloodstream, even years later. This puts fetuses and newborns at risk, as well.

Hanna-Attisha wryly describes lead as “a gift that keeps on giving.”

There is no such thing as a safe dosage of lead, and anything above 5 micrograms per deciliter is considered elevated. In cases where household lead exposure is of high concern, the Centers for Disease Control and Prevention recommends lead screenings for all children between ages 1 and 2.

Knowing that blood reports already were on file at Hurley, a member of America’s Essential Hospitals, Hanna-Attisha and her colleague Jenny LaChance decided to compare blood lead levels in 2013 — before the city switched its water source to the Flint River — to those in 2015, after the switch.

They spent 16 sleepless days analyzing data from blood reports of more than 1,400 children ages 6 and under who had been tested for lead. “We went into a pattern of working all day, going home, and then texting and working till late at night while at our respective homes,” LaChance, a certified clinical research coordinator at Hurley, recalls.

What Hanna-Attisha and LaChance found was worrisome. The percentage of children with more than 5 micrograms per deciliter of lead in their blood more than tripled in some areas after the switch to Flint River water. Feeling an obligation to share the findings with the public, Hurley called a news conference on Sept. 24, 2015.

State officials promptly dismissed the research, calling Hanna-Attisha an “unfortunate researcher” who was “splicing and dicing numbers.” But the doctor held her ground until state officials a week later apologized and accepted that their data agreed with hers. Three months after that, President Obama declared a federal state of emergency in the city.

Essential Hospital Stands for Those without a Voice

Since her revealing research, Hanna-Attisha — now ubiquitously known as Dr. Mona — has taken on several additional responsibilities. She was named head of the new Pediatric Public Health Initiative (PPHI) by MSU and Hurley. She meets with national and international health officials weekly. She has been profiled by major news outlets, appeared on talk shows, and continues to respond to media requests about 10 times a day. 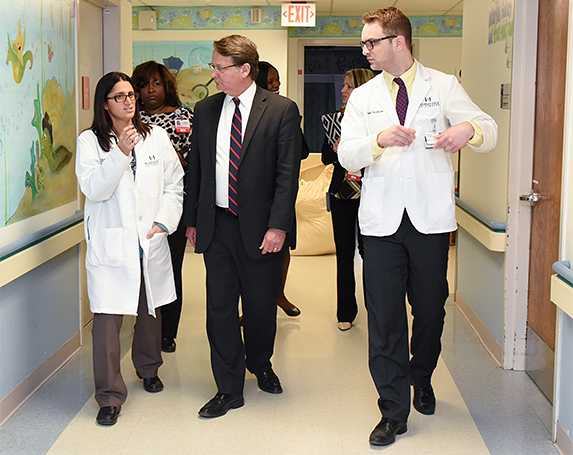 Hanna-Attisha shrugs off any praise, saying she’s just doing her job. She also is quick to note that Hurley’s commitment to the community as Flint’s essential hospital paved the way for her.

“This research and our work could only have happened at Hurley because we are a public, nonprofit academic children’s hospital,” she says. “There is a beauty of being in a lean public hospital that can be flexible and responsive to community needs.”

When Hanna-Attisha decided to challenge the state, she knew a lot was at stake for Hurley. The public hospital receives state funding and it was a mayoral election season. But Hurley CEO Melany Gavulic did not hesitate in offering support.

Normally, it can take more than a month to get a new research project through a hospital’s institutional review board. Hurley approved Hanna-Attisha’s research plan in just two days.

“[This] is unheard of in larger institutions full of bureaucracy,” Hanna-Attisha says. “But everyone in our institute is committed to the community and understood the urgency and public health ramifications.”