On the eighth floor of The University of Texas Medical Branch (UTMB) in Galveston is a room unlike one at any other hospital.

It’s divided into several workstations. In one corner sit a 3-D printer and fabric-cutting machines. Another area houses a bright red bookshelf stacked with materials you would find at a home improvement store: dowels, Velcro, glue guns, and a variety of plastics. Power tools and drill bits occupy another corner. Obscure words and diagrams are scribbled on a wall-sized whiteboard.

Opened in September 2015, this is the nation’s first medical makerspace, a do-it-yourself area for UTMB’s nurses to brainstorm and invent solutions for better patient care.

The notion behind MakerNurse, an initiative launched by two MIT researchers, is that nurses are most familiar with the displeasures and discomforts of patients. In 2013, co-founders Jose Gomez-Marquez and Anna Young began surveying nurses around the country about what they would invent to improve quality of care. They received a surplus of ideas, including customized wound dressings for neonatal intensive care unit (NICU) patients, glow-in-the-dark pill bottles, cough pillows, and 3-D clips to keep tubes and cables organized.

Based on the strong feedback, the two entrepreneurs launched the MakerNurse project to provide nurses nationwide with the resources and expertise to bring their ideas to fruition. The duo set up mobile stations in six hospitals. They created a blog where nurses could showcase their inventions and inspire each other. Finally, in September, the first permanent MakerHealth Space opened at UTMB’s John Sealy Hospital, sponsored in part by the Robert Wood Johnson Foundation.

When word of the new makerspace reached the labor and delivery unit at UTMB, colleagues of nurse clinician Debra Flynn encouraged her to visit the area. Flynn had a knack for inventing and often discussed her ideas for personalized care. For example, it bothered her to have to shield patient IVs with tape when they showered. The tape succeeded in keeping water out, but it was painful for patients when peeled off.

Determined to create a solution, Flynn decided to put a passing idea to the test in the makerspace. Using a vinyl-like material, she created a one-size-fit-all sleeve that could be tied at the top and bottom to keep water out.

“We’re always in a rush, so something that’s a little simpler can be a lifesaver,” Flynn says. “I hope [staff] realize what a great opportunity this is and take the time to visit the makerspace.”

In the short time since the facility’s inauguration, more than 100 nurses have registered to use the space, two dozen of whom already have developed prototypes.

Jason Schaeffer, a nurse in the Blocker Burn Unit, has crafted a hand-held shower system made of PVC valves for chemical burn victims. Resourceful staffers in the anesthesiology and otolaryngology departments worked together to devise an oral suctioning device. Flynn even has her next project lined up: to create something that can protect incisions of patients recovering from cesarean section or abdominal surgery. 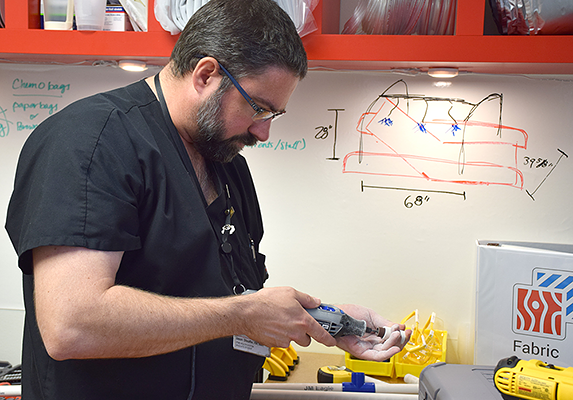 A “selfie station” at the makerspace encourages collaboration among departments. Here, not only can inventors strike a pose with their inventions, but they also can produce a guide to recreating their devices.

Although the project is spearheaded by nurses, other medical staff and students also are encouraged to engage. The makerspace is one more way UTMB “cultivates a spirit of creativity and innovation,” says David Marshall, chief nursing and patient care services officer at UTMB.

Before any devices are introduced to a clinical area, they undergo a strict infection control protocol. Beyond providing health care staff with a platform to channel their creativity, the in-house devices are more cost-efficient than outsourced projects.

Due to the initiative’s success, a proposal has been put forth to move the makerspace to a larger location on campus.

“Hopefully, instead of missing out on fleeting thoughts that are ultimately not realized, hospital staff can go to the makerspace and talk with someone about ideas that arise when they are providing care, sketch the idea out on the whiteboard, and perhaps build a prototype,” says Marshall. “That’s part of the reason for having the space in close proximity to where care is delivered.”