It’s been more than a year since the Pulse nightclub shootings in Orlando, Fla. — the nation’s deadliest mass casualty event until the recent attack at an outdoor concert in Las Vegas.

Time has not dulled the memories of the Pulse tragedy among staff at essential hospital Orlando Regional Medical Center (ORMC). Over the past 16 months, hospital leaders have worked to prepare ORMC and other essential hospitals for mass casualty events and to help employees cope with the aftermath.

“Just as we learned from the experiences of other trauma centers and hospitals that had mass shooting events before Pulse…we had a responsibility to pass on what we learned,” says Michael Cheatham, MD, chief surgical quality officer at ORMC, an America’s Essential Hospitals member. 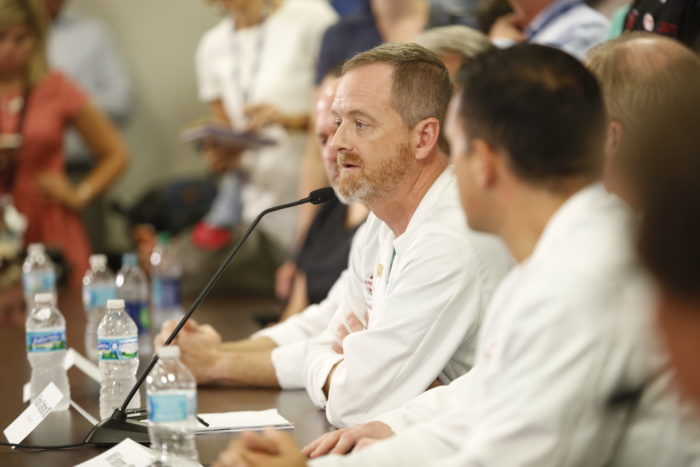 Hospital leaders, physicians, and nurses have given hundreds of talks around the country and the world about their experiences, says ORMC President Mark Jones. This past July, Gary Parrish, MD, medical director of ORMC’s emergency department, held one such talk with association member University Medical Center of Southern Nevada (UMCSN). It was fortunate timing: As the state’s only level I trauma center, UMCSN treated more than 100 victims of the Oct. 1 shootings near the Mandalay Bay Resort and Casino, which killed 58 and wounded more than 500.

“He shared with our trauma and emergency department teams the lessons they learned from that [Pulse] mass casualty, including what they did right and where they could have improved,” says Danita Cohen, UMCSN’s chief experience officer. “His firsthand knowledge was invaluable and immediately blended into the way we trained and prepared for mass casualty going forward.”

Parrish, who was on duty the night of the Pulse massacre, has remained in touch with trauma surgeons and administrative staff at UMCSN since the Oct. 1 shootings.

“The fact that they were even wanting to have me and others out there to hear our experience, in my opinion, speaks for how prepared they wanted to be,” Parrish says. Mass casualties bring unforeseen challenges for the whole community, he says, and he tries to share with hospitals the importance of a post-incident plan.

“This is a tremendous, tremendous impact on the institution and on the community,” Parrish says. “You have to have somewhat of a plan in place for a road map for recovery, how you’re going to help your caregivers, not to mention your patients.”

Orlando Health, ORMC’s parent system, has helped other essential hospitals develop this road map, including University of Virginia (UVA) Health System, in Charlottesville, Va. As he prepared for the “Unite the Right” rally in Charlottesville this past August, UVA trauma center director Jeffrey Young, MD, remembered a talk with Cheatham shortly after the Pulse shooting.

“You have to be careful about having a disaster structure that is entirely different from your normal daily structure, as far as charts and paperwork and equipment, because if people only use something once every couple of years, they’re not going to be as facile as if they use it every day,” Young recalls. “His conclusion was that you handle trauma every day, it’s just more of it.”

Young and his team followed Cheatham’s advice as they cared for roughly 30 people who were injured at the rally. They kept most basic procedures the same but prepared extra operating rooms and set up a command center to manage calls from emergency medical services providers. Learning from Orlando Health’s firsthand experience helped UVA Health System prepare, officials say.

“Instead of reinventing the wheel on a regular basis, why not use what other facilities have done?” says William Brady, MD, UVA Health System’s medical director for emergency management.

Orlando Health teams stress in their presentations to other hospitals that it’s important to keep emergency preparedness plans current.

Cheatham urges hospitals to prepare to respond not only to patients, but to their families, friends, and community members, and encourages hospital staff to proactively develop strong relationships with law enforcement and government officials. “If you’re trying to establish those relationships after an event has occurred or as it’s unfolding, you’re already behind the eight ball.”

Orlando Health is reflecting on its own emergency plans, too. The health system created a 51-page report on the incident, identifying areas for improvement, including a mass notification system for all campuses and improved hospital security. Leaders plan to expand the ORMC trauma center to increase the hospital’s capacity to handle future mass casualty events and high patient volume. The health system continues to offer counseling for staff members and is studying the incidence of post-traumatic stress disorder among surgical residents. It plans to publish that study next year.

Orlando Health also plans to publish a book by spring 2018 to share with other hospitals, with 40 chapters, each focusing on a different hospital department. The system has made it its mission to help other hospitals prepare for mass casualty events.

“The ability of hospitals to support each other and share what is learned from the tragic events like this, I think, is very important if we are going to continue to improve,” Cheatham says.