Like other essential hospitals, Boston Medical Center often reaches beyond its walls to engage patients where they are best able to access care. In a pioneering new program, the hospital has extended its reach to an unexpected realm: the virtual world.

BMC is researching the effectiveness of virtual technology for diabetes self-management (DSM) through a five-year, $3.5 million grant from the National Institute of Diabetes and Digestive and Kidney Diseases (NIDDK).

Those in Second Life will create an avatar to attend medical sessions with physicians and other patients. They will be able to speak to the group, set up individual virtual meetings, and experiment with new behaviors, such as healthful cooking and exercise, using their avatar.

An advantage of engaging with an avatar is that it offers the opportunity to explore changes without the difficulty or risk of actually making them in the real world, says Suzanne Mitchell, MD, grant recipient and family physician at BMC. “Learning with this technology allows people to get past the failures and make hard lifestyle changes,” she says.

Mitchell’s study builds off of a theory known as the Proteus Effect, established by Stanford University researchers in 2007. The theory states that the behavior of an individual in a virtual world, including an avatar’s physical changes, can influence a person’s real life.

A 2014 pilot study by BMC of 89 African-American women found that those who took part in DSM education through Second Life had comparable, if not better, health results than patients who attended the same classes in-person. Many of the women in Second Life felt encouraged to make changes by connecting with fellow patients and their own avatars. 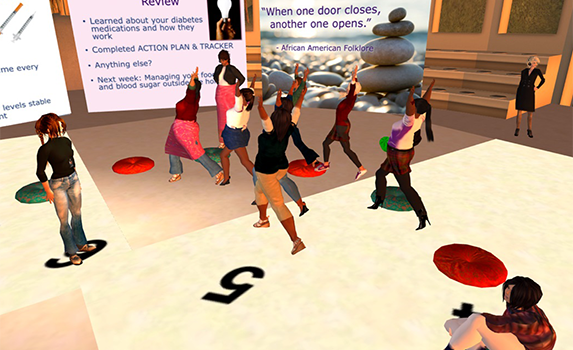 The current study focuses on African-Americans and Latinas because these are high-risk populations. Research shows that patients in these communities commonly face stigma, lack of access to healthful food, and the loss of family members with diabetes, among other problems.

Women play a key role, Mitchell says, because they tend to be the health care drivers of the household. They are usually the ones who make health care-related decisions for the family and provide care when someone falls sick. In fact, some women in the pilot study took the initiative to bring family members into the virtual sessions with them.

“If shown to be effective, the virtual reality approach could serve as an important, and potentially cost-effective, method to enhance diabetes self-management in large numbers of high-risk individuals living with diabetes,” Christine Hunter, PhD, a director of behavioral research at NIDDK, says.

Mitchell hopes the virtual technology will guide patients in improving their quality of life.

“It’s an immersive experience different from blogging, chatting, and even skyping,” she says. “We’re hoping to demonstrate it has something deeper to offer that can help transform lives.”

On The Hill: House Health Panels Shaping Up