Harborview Medical Center, in Seattle, has found an unconventional use for Pokémon Go, the augmented-reality game that has enthralled millions of players around the globe. It turns out, hunting down Pikachu can help patients recover from burn injuries. 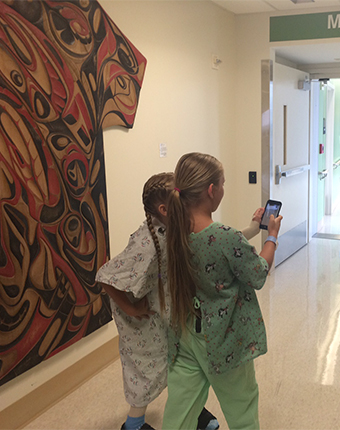 Researchers at the hospital, a part of America’s Essential Hospitals member UW Medicine, conducted a pilot study during which a child burn victim walked around the building in search of Pokémon characters with the help of her physical therapist. The idea was that the game would not only get patients moving, but also take their mind off the pain. And that’s exactly what the case study found.

“The patient had burns on her legs,” says Shelley Wiechman, attending psychologist in Harborview’s Burn and Pediatric Trauma Service and Pediatric Primary Care Clinic. “She was anxious about the pain and discomfort she experienced while walking, but Pokémon Go made walking into a game.”

Pokémon Go launched in July and the immediate craze crushed mobile application download records. The game involves using a smartphone to find virtual cartoon characters in and around the player’s real environment. It has raised some concerns about privacy and safety, but Harborview says its patients stay within hospital premises and always are supervised.

Even with pain medications, standing and walking on burned limbs can be painful for burn victims. It often is difficult for physical and occupational therapists to encourage such patients to get out of bed. Hospital staff hope that incorporating the new and popular game will give patients the extra motivation they need.

“For patients with healing leg and foot burns, walking is especially valuable because bearing the weight of their bodies strengthens the patient’s leg and feet muscles,” explains Susan Smith, an occupational therapist at Harborview.

Pain requires attention, and Pokémon Go is the latest attempt in more than two decades of efforts by Harborview to use artificial reality to distract patients from their pain. The initiative began in the mid-1990s with a virtual-reality (VR) game called SnowWorld, a joint creation of University of Washington (UW) researchers and the hospital. During painful procedures, such as wound cleansing, patients can put on a headset and be transported into a world with penguins, snowmen, and glacial caverns.

Years of testing at the hospital show that patients spend significantly less time thinking about their pain while playing VR games. They experience 25 to 50 percent less pain intensity and unpleasantness than when traditional methods of distraction are used.

“People typically focus most of their attention in the direction they are looking,” says Hunter Hoffman, director of VR research at UW. Burn patients typically look at their burn wounds when the nurse is cleaning their wound. In contrast, when using immersive virtual reality, patients’ eyes are looking at computer-generated virtual images in the VR goggles.”

The added benefit of Pokémon Go is that it gets patients moving. Harborview is planning to expand use of the game, with the goal that patients will require less medication and be able to push themselves further in physical therapy.