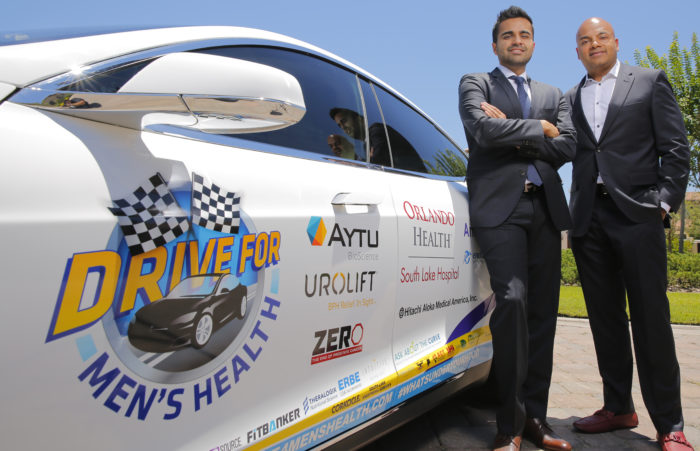 Jamin Brahmbhatt, MD and Sijo Parekattil, MD hit the road for their fourth annual Drive for Men’s Health. This year, they embarked on “Mission Manhood,” encouraging men to talk about their family health history. Photo courtesy of Orlando Health.

It all started when Sijo Parekattil bought a Tesla.

Three years ago, Parekattil and Jamin Brahmbhatt — both urologists at association member Orlando Health’s South Lake Hospital — planned to carpool to New York to visit their families. Their goal was to beat the world record for the fastest trip from Orlando to New York City in a Tesla. They didn’t quite make it.

But the pair of specialists found a bigger mission for their road trip. In honor of Men’s Health Month, Brahmbhatt and Parekattil decided to embark on a “Drive for Men’s Health” to inspire men to take charge of their physical and mental wellbeing. Visiting gyms, bars, and community events around the country, the pair combines social and fitness events with health awareness lectures. Their mission is simple: to encourage men to get active, make healthy food decisions, and develop good relationships with health care professionals.

“I think there’s a little bit of a macho effect … ‘When it happens, it happens, I’ll just take care of it later,’” Brahmbhatt said. “We want to shift that mindset in these men. You don’t want to wait until it’s too late.”

“What we’re trying to do on the road this year is to get young minds, young men, and their parental figures inspired to start the conversation at home,” Brahmbhatt said.

Brahmbhatt and Parekattil embarked on their fourth cross-country trip from June 3 – 10. This year’s 3,000-mile journey took them across the southern United States from Windermere, Fla., to Los Angeles, and then on to Salt Lake City — all cities especially plagued by obesity.

This year’s stops included a reception in downtown Orlando, a second-line parade on Bourbon Street in New Orleans, yoga under the stars at Rice University’s football stadium, Soul Cycle in Los Angeles, and a 5K run/walk for ZERO Prostate Cancer in Salt Lake City. Along the way, they hosted live video talks with local physicians. Brahmbhatt said their goal is to create a fun and lively atmosphere at events.

“Even though the Tesla’s been out for a few years now, it still creates a buzz when people are around it,” Brahmbhatt said.

The car creates an effective metaphor for men’s health, too. 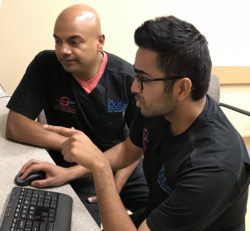 Their annual journey has inspired Brahmbhatt and Parekattil to take charge of their own health. Brahmbhatt acknowledged that physicians often struggle with poor diets and burnout.

“We looked at our pictures from our second year doing this drive for men’s health, and we were both heavy weight,” Brahmbhatt said. “We were like, ‘Man, we need to start walking the walk and talking the talk.’” The doctors have lost a combined 80 pounds since then, and they now help encourage other physicians to model healthy behavior.

They’re already looking forward to next year’s drive, Brahmbhatt said. “Let’s make the world a healthier place, and if it takes a fancy Tesla and two crazy doctors that hit the road, then that’s what it is!”