Public hospitals have always played an important role in the United States health care system and their contributions are emphasized in a new book, A Spirit of Charity.

King spoke with America’s Essential Hospitals about the driving forces behind the book and the continued importance of essential hospitals in the United States health care system.

Why did you write this book? 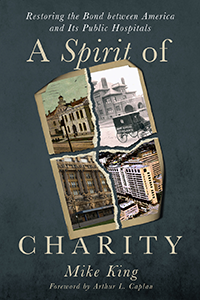 Grady Memorial Hospital in Atlanta, Parkland Memorial Hospital in Dallas, the John H. Stroger Hospital of Cook County in Chicago, and other iconic public hospitals offer a unique prism for writing about how our nation’s health care system functions and where it needs improvement. Unfortunately, most Americans and their elected representatives have little idea how these hospitals are financed and why they really matter. So I thought I’d try to explain it and, along the way, hopefully elevate the debate as we continue to deal with the unfinished business of health care reform.

What has been the reaction, so far, to your book?

Many readers tell me they had not thought about this issue in historic terms. They certainly were aware of all the acrimony and ideological positioning over health care during the years leading up to and after the passage of the Affordable Care Act (ACA). Very few people — not even public health advocates, physicians, nurses and politicians — thought of this journey toward universal health insurance as going back a century or more. They are surprised that some of the same discussion points we hear now could be traced back a hundred years, or that the United States has been something of an outlier on this issue, compared with other industrialized nations.

The other very interesting reaction I hear, especially among those readers outside of medicine and public health, is that they had no idea how different public hospitals are compared with community and private hospitals. They had no idea the range of services essential hospitals provide and the level of expertise that exists within them.

What parallels can you draw between the roll out of Medicare/Medicaid and the Affordable Care Act?

Both of these landmark laws required a great deal of compromise and resulted in some unintended consequences.

In 1965, President Johnson needed to secure the votes for his first priority — Medicare. So, he compromised by making sure states had a lot of say and control over how Medicaid was run for the poor. There was a lot of opposition to the whole idea of a government-run program for the poor, especially among Southern politicians, and initially, a lot of states balked at participating. But they came around when they got to control their spending on it by setting reimbursement rates for hospitals and doctors and by strictly limiting who was allowed to enroll in the program. The result was this patchwork plan where in some states Medicaid was adopted as a viable health insurance program for people below the poverty level and in other states it was administered as a welfare program and restricted to only the poorest of the poor. In many states if you weren’t elderly and/or disabled, Medicaid didn’t cover you regardless of your level of poverty. Thanks to a court decision in 2012, that’s still the way it is in about 20 of the 50 states.

Now fast-forward to 2010, to when President Obama and his Senate negotiators had to make a decision about whether in the new law there would be a “public option,” in addition to the commercial plans available on the health insurance exchanges. But the fear was Republicans would balk at anything that they considered government competition to the private sector, so Democrats in the Senate and the president walked away from the idea, thinking by rejecting it, some Republicans might come on board. It was a huge mistake, in my view, because the Republicans were never going to lift a finger to enact any of the President’s ideas.

But, in hindsight, had there been a public option available, then younger Americans wouldn’t be subsidizing the premium costs for private plans available on the exchanges to the degree that they have to be now. One result is that we have gaps of uninsured young Americans who don’t want to pay premiums they consider too high and unfair to them because they are healthy and unlikely to need the coverage. And at the same time we have Americans in their 50s and early 60s who are working, who are ineligible for Medicaid in many states, but who still aren’t earning enough to afford policies even when the government provides them premium price support. So they are not covered either, or they are covered by a cheap plan with a high deductible they can’t really afford.

Once again we have to ask: Who takes care of these people who fall through the gaps when they get sick, or hurt, and don’t have insurance or can’t afford their $5,000 deductible? The very hospitals your organization represents.

How has the role of essential hospitals changed under the Affordable Care Act?

I don’t mean to suggest the ACA has been a disaster for public hospitals. But public hospitals are still filling in the gaps and there are many gaps remaining, especially in those states that have refused to enact Medicaid expansion. So their mission remains unchanged, and they don’t benefit the way their private competitors have. What worries me is that the ACA may have left a misleading impression among state and local officials (the ones who must put up state and local taxes to support public hospital services) that the ACA fixed all this and therefore the need for local tax money has diminished. That’s far from the case, and they should not be backing off their commitments to help provide operational funding for these essential places.

If you could make only one argument for robust funding support for the health care safety net, what would it be?

There are essential services in every community that are only being provided by these hospitals and their safety net colleagues. Insurance reform can only change the patient pay mix so much. Because most community and private hospitals operate on strict revenue over costs margins, they will never take up these costly, not-profitable services and make them available to anyone who needs them. That’s entirely understandable in our medical marketplace. They can’t afford to jeopardize their bottom lines. But public hospitals operate on a different business model and have a totally different mission. They must get a separate level of funding from government at every level — federal, state and local — that goes beyond just reimbursement for the cost of care provided to Medicare and Medicaid patients.

These essential services at these specific hospitals deserve operational support from all taxpayers. They cannot exist on insurance reimbursement alone.

America’s Essential Hospitals and the Seattle Book Company are pleased to offer an exclusive online discount code to our members for ordering A Spirit of Charity.