In 2014, the Ebola virus dominated international headlines, as a West African outbreak claimed the lives of more than 11,000 people and reached outside the continent, including to the United States.

Earlier this year, the deadly virus returned in the Democratic Republic of the Congo, but with a much more promising outlook. The World Health Organization (WHO) on July 24 declared the outbreak over after just three months, 53 reported infections, and 33 deaths.

This time, the WHO controlled the virus with rVSV-ZEBOV, an experimental vaccine developed in part by Thomas Geisbert, PhD, a professor of microbiology and immunology at association member The University of Texas Medical Branch (UTMB), in Galveston, Texas. None of the 3,200 people vaccinated were infected. 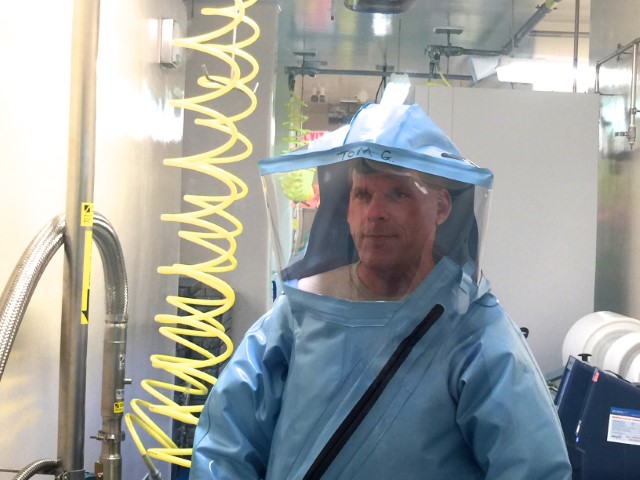 “It takes you two to three times as long to do anything in a space suit,” Thomas Geisbert, PhD, jokes about working in UTMB’s biosafety level 4 lab. Photo courtesy of Christopher Smith.

For Geisbert, the vaccine caps decades of work to combat the Ebola virus.

“Before 9/11, you didn’t hear a lot about it,” he says. “Outbreaks occurred sporadically in central Africa, in remote areas.”

One such outbreak occurred in a group of monkeys imported to a laboratory in Virginia. Geisbert discovered this strain of Ebola, known as the Reston virus, while working as a research microbiologist at the United States Army Institute of Infectious Diseases, in 1989.

The Sept. 11, 2001, terrorist attacks spurred intense government interest in weapons of mass destruction, leading to additional funding for pre-clinical research. “The government, after 9/11, recognized that agents like this could be used for terrorism, especially after the Anthrax letters,” Geisbert says, referring to letters containing anthrax spores mailed to news media outlets and U.S. Senate offices in the weeks following the Sept. 11 attacks.

In 2005, he co-authored a paper published in Nature Medicine that highlighted the effects of a vaccine in preventing Ebola in nonhuman primates. While successful, these vaccines ultimately stalled due to lack of funding for clinical trials.

“There’s not a huge market for an Ebola vaccine,” Geisbert says.

Then, the 2014 outbreak hit. Geisbert and Heinz Feldmann, MD, PhD, of the Public Health Agency of Canada, developed a vaccine that was acquired by Merck & Company Inc. and distributed toward the end of the outbreak.

Unlike previous attempts at Ebola vaccines, which triggered the body to produce antibodies to fight the virus, the recombinant vesicular stomatis virus vaccine was engineered to mimic the Ebola virus and provoke an immune response.

“You basically take a virus that doesn’t cause much illness in humans. We engineer it so that we take that part of the vaccine out. Instead, we put in the gene that codes the Ebola virus,” Geisbert says. “That vaccine then doesn’t cause disease in people, but it tricks your body. Your body thinks it’s seeing real Ebola virus, so you build up an immune response against it.”

WHO officials administered the vaccine through a ring strategy, targeting first those in contact with Ebola-infected people and then secondary contacts. Officials also targeted health care workers and those involved in burials. More than 4,000 people received the vaccine, all of whom survived.

Geisbert was among the “Ebola fighters” named as TIME’s 2014 person of the year. He has continued to conduct studies at UTMB’s biosafety level 4 lab to support the development of the rVSV-ZEBOV vaccine.

When the virus recurred in 2018, the WHO deployed the vaccine again.

“I think one of the lessons learned this time around [was] just trying to vaccinate these people as quickly as you can, so that you have some stability,” Geisbert says. “A particular benefit of this vaccine is [that] it works very rapidly as a single injection vaccine, which is pretty much what you need in this type of situation.”

While the outbreak in the Congo may be over, the fight against Ebola continues. Scientists recently found evidence that an infected woman who survived the West African epidemic might have relapsed and transmitted the disease to her husband and sons. Vaccination could be key in reducing the stigma Ebola survivors continue to face.

As for Geisbert, his mission is simple: to raise awareness about and continue working to protect against the Ebola virus. “I think it’s rewarding if you develop something that even saves a single person’s life.”

For information about the availability of auxiliary aids and services specific to our federally funded programs, please visit: https://www.medicare.gov/about-us/accessibility-nondiscrimination-notice.