October marks the anniversary of the association’s research arm, the Essential Hospitals Institute, which opened in 1987 as the National Public Health and Hospital Institute (NPHHI). Christy Neuhoff, JD, MBA, senior vice president and chief legal officer at association member St. Luke’s Health System, in Boise, Idaho, is the most recent past-chair of the Institute board of directors. She reflects on her atypical term as board chair during a pandemic, the value of practical research, and her experience creating and participating in the association’s leadership development programs. 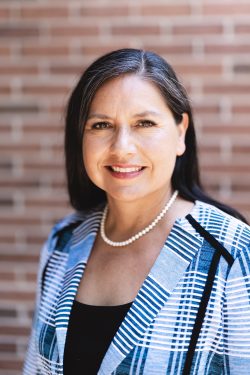 Christy Neuhoff, JD, MBA, recently completed her term as chair of the Essential Hospitals Institute board of directors.

Christy Neuhoff: I initially got involved with America’s Essential Hospitals when it was the National Association of Public Hospitals and Health Systems (NAPH). I was working at a different member organization — Shands Healthcare, which is now UF Health. I think the first conference I went to was in Monterey, Calif., and I started going to the Policy Assemblies. I really was looking to NAPH at the time for a lot of policy and advocacy information — draft comments on proposed rules and advocacy on various federal legislative issues.

Then in 2007, I was an association fellow. So that would be my initial connection to the Institute, because the Institute runs the Fellows Program. I really had a great experience with that. I met really great people, fantastic people, from other organizations. It was incredibly helpful to really be able to learn from people who were advocating for other essential hospitals, although we didn’t call ourselves that yet at the time.

In 2008, I moved to Idaho to join St. Luke’s, which, at the time, was not a member of NAPH. I thought membership would be valuable to the organization, so I introduced St. Luke’s to the association. A few years later, I was invited to serve on the board of the Institute. We hadn’t changed names yet, so, at the time, it was the National Public Health and Hospital Institute (NPHHI). Then we went through the strategic planning and rebranding process and changed the name to America’s Essential Hospitals and Essential Hospitals Institute.

Schweich: What was the rebranding process like as a participant?

Neuhoff: I think it was an interesting thing to be a part of, because NAPH had a really strong reputation, not just among public and safety net hospitals and health systems, but also on the Hill. So the idea of changing the name was a really big deal. But recognizing that we had more and more members who were not actually public hospitals, it made sense to come up with something that was more descriptive of who the membership really was.

There was a pretty extensive effort to interview members and interview others about what these hospitals and health systems bring to the table. We thought about not even saying “hospitals,” but then, we thought we really needed to keep that in the name, because that is the core of what’s represented here, and just changing it to essential health systems didn’t sound quite right.

Schweich: Can you reflect on how the Institute’s research focus evolved over time and what some of the most meaningful research work has been for you?

Neuhoff: When I first was on this board, the bulk of our research — perhaps all of it — was around various quality initiatives. While that’s important work, for sure, over time, there has been significant effort to try to match the research with some of the key goals of the association’s membership, so that is what the Institute brings to the table is more uniquely focused on the value offered by essential hospitals, compared with work that might be done by other associations.

For example, the Institute has focused substantial effort on population health and community health research, including examining the wide array of existing activities to identify the types of programs that lead to meaningful improvements and putting together the Essential Communities site. The Institute’s publications on these subjects are incredibly valuable. Other research efforts that are essential hospital–focused relate to equity and specifically health equity, as well as sustainability — areas that may not be as much of a focus for other organizations. This research should allow the Institute to disseminate new ideas around good practices that essential hospitals can use to even better serve our communities and especially improve outcomes for our most vulnerable people.

In doing the community health work here at St Luke’s, when we were talking about programs that are evidence-based, that we could expect to lead to better outcomes, we started reframing that to be evidence-informed. A program that was successful in an urban environment may be worth implementing in a rural setting even though adaptations may be needed.

Schweich: That’s a good point. Have there been any Institute research projects that have stuck out to you personally, as particularly meaningful?

Neuhoff: We put together a road map of how organizations could implement community health programs and make them effective. I thought that work was especially worthwhile, and that was something the Institute board really wanted to see. One thing I especially appreciate about the Institute’s work is the deliverables are structured in a way that they can be reasonably readily put into practice by association members.

Schweich: You mentioned you were a fellow. Tell me about your involvement with the association’s leadership development programs. How have these programs influenced your leadership style?

Neuhoff: I think one of the ways in which participating in the Fellows Program influenced my leadership is that it really helped me become more aware of the importance of working with people from other organizations to help understand problems that we all face. It really demonstrated how well goals can be accomplished when organizations appropriately collaborate with each other.

Neuhoff: I was on the steering committee that stood up the Essential Women’s Leadership Academy (EWLA). When we were first talking about that, we found it notable that our member organizations really didn’t have more female representation on their boards than non–health care organizations did. It seems like in essential hospitals, you would have greater diversity in the leadership roles, and of course, in health care, our front-line staff are majority female. But then when you get to the upper level, at the C-suite level, in most organizations, at least at the time, the percentage of women was very low.

We wanted to put together a program for developing women who were mid-career and had high potential for moving on to senior executive roles that was focused on what skills are needed to be a leader in essential hospitals. We wanted it to be distinguishable in some ways from the women’s mentorship programs that other organizations have.

We thought it would be important here to include orientation for both the mentors and the participants. Instead of assuming that everyone knows how to mentor, we assume that everyone could use more training and more knowledge in that area. The mentor orientation includes discussion about the difference between coaching and mentoring and provides useful tools for the mentors. The participants have coaches assigned to them as well, so they get the benefit of both coaching and mentoring.

We also wanted to have some classroom sessions about topics like essential hospital financing — there were some basic knowledge areas that we thought any executive leader should have, whether they’re in finance, operations, government relations, a medical leader, or some other type of executive.

I know that some of our EWLA alumnae have moved into senior executive roles. The feedback the Institute has gotten from participants over the years has been very, very good. People have found it to be a valuable experience.

Schweich: I think it’s interesting that you flagged the importance of training for the mentors, because I feel like women are so often thrust into these mentor roles for other women, and it’s hard when you don’t necessarily have the tools.

Neuhoff: Yes, I thought the mentor orientation was well worth the time. It included a recommended framework for the sessions that we would have with our mentees, going forward, and some good insights into the kinds of conversations that we should be having with them, to help them advance their own personal goals. We also did some exercises as a group, so the mentors  got to know each other better. And you’re right. Usually, it’s just assumed if you’re in a leadership role, you can mentor someone. Some people can do it naturally, and other people have to spend some time before they figure it out.

Schweich: Reflecting on your term as board chair, I know it’s been an unconventional year, but what has been the most surprising thing you’ve learned or taken away from this experience?

Neuhoff: During my term as chair, we did not have a single in-person meeting. Not a single one. The only in-person meeting I chaired was my last as chair-elect, which occurred the week that the cruise ships with COVID-positive passengers were arriving on the west coast. Due to that timing, the then-current chair, Delvecchio Finley, could not come to the meeting and asked me to chair in his place. While that was the last in-person meeting, we only had half the board there, because COVID-19 was striking that week.

This was just such a strange year, so there are so many surprising things. I won’t call this surprising, but I will say the structural racism work was something that maybe wasn’t planned to be started when it was started, but the social climate highlighted the urgency of addressing it. I thought it was impressive how quickly the team at the association and the Institute came up with a plan for ramping up efforts to combat the public health issue of structural racism across all the communities that our members serve.

Schweich: What does the association mean to you, as we look back on 40 years and your involvement in it?

Neuhoff: I’m not sure that I appreciated how young, frankly, the association was when I joined it. It seemed so well-established when I first started to participate. Now, thinking about this being the 40th anniversary, and I’ve been involved for 16 or 17 years, which is hard to believe has been nearly half of the association’s existence. What I see as the particular value of it is as a platform for hospitals that have shared values to come together, to support one another, and, more importantly, to support the patients and communities we all serve.

To learn more about the association’s history, visit 40YearsEssential.org.