It is an honor and a pleasure to be invited to write this first installment of a new blog series to celebrate the 40th anniversary of America’s Essential Hospitals. Let me first wish you all a belated happy new year! (2021 has to be a happier year than 2020, doesn’t it?) There are many things we have sorely missed during a pandemic that is now almost 1 year old and has taken more than half a million lives in this country. Right up there on my list is seeing all of you in person at the annual conference last year — the first one I’ve missed attending in person in 39 years. I hope we will all be able to gather again soon.

Every great enterprise has its unique origin story. The story of America’s Essential Hospitals — one especially relevant in our current political environment — is simply this: The grand and effective organization that represents you today began in quite humble fashion more than 40 years ago, with just five original members. 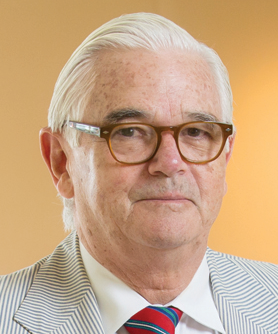 In retrospect, it is apparent to me today that the National Association of Public Hospitals (NAPH), your current association’s predecessor, probably never would have succeeded without the effective bipartisan use of what author Richard Sorian, in a recent Health Affairs article, termed “an archaic legislative procedure [that] has been getting a lot of airtime in the media and around Capitol Hill.”

The article traces the history of a legislative tool that, as the author points out, was enacted in 1974 “to curb executive excesses by President Richard Nixon and put more of the budget decision making in the hands of Congress….[including] provisions that would allow Congress to include language in the budget resolutions to reconcile actual spending and revenue (that is, taxes) with the figures adopted in the budget resolution.”

In recent years, of course, the “budget reconciliation” process has become more of a partisan procedure, but as the Health Affairs article points out, that wasn’t always the case. Forty years ago, the concept had a somewhat broader and different meaning — one that was truer to the concept of “reconciling” partisan differences to compromise on important substantive legislation.

In 1980, America experienced a major political shift similar to the one we just experienced in 2020, with the landslide election of President Ronald Reagan and the Senate flipping to Republican control for the first time since 1955. Once President Reagan took office, he sought to impose broad reforms on the Great Society health programs, starting with an ambitious proposal to cap federal Medicaid spending and convert the program into a block grant to the states.

The second reconciliation bill (the Omnibus Budget Reconciliation Act, or OBRA, of 1981) would be much more robust than the 1980 bill, with more than $130 billion in savings. However, with the House of Representatives continuing under Democratic control, divided government ensured that many broader and purely partisan proposals would be nonstarters. Instead, it was budget reconciliation that offered the opportunity for the bipartisan enactment of somewhat more modest reforms, including the seeds of future benefits for NAPH and its members.

In particular, Medicaid caps were rejected in 1981, while a more modest bipartisan agreement was reached on repealing the requirement that Medicaid payment methodologies be based on Medicare “reasonable cost” principles. States would be given new flexibility to devise prospective payment methodologies for hospitals and other providers. As part of this initiative, House Democrats (led by Rep. Henry Waxman (D-CA), chair of the Committee on Energy and Commerce health subcommittee) were able to include at least a few protections. Waxman secured agreement that Medicaid cuts in OBRA 1981 would expire after three years. At NAPH’s request, he also included a provision that required states, in developing reimbursement methodologies for hospitals, to “take into account the situation of hospitals that serve a disproportionate number of low-income patients with special needs.” The Medicaid disproportionate share hospital (DSH) requirement was born.

The following year, in another reconciliation bill, the Tax Equity and Fiscal Responsibility Act of 1982 (TEFRA), Congress began to change hospital reimbursement rules for the Medicare program. Courtesy this time of Reps. Charlie Rangel (D-NY) and Pete Stark (D-CA), key members of the House Committee on Ways and Means health subcommittee, NAPH this time was able to extend the DSH concept to Medicare.

Neither Medicaid nor Medicare DSH were effectively implemented immediately following their enactment. Indeed, it took almost a decade of additional legislation — almost always in the context of budget reconciliation bills that enjoyed bipartisan support — for those provisions to become meaningful and enforceable concepts. A 1985 NAPH study showed that Medicaid DSH payments nationally totaled only about $550 million that year. By the early 1990s, however, Medicaid DSH and related supplemental payment initiatives exceeded $20 billion, and Medicare accounted for another $4 billion. As Sen. Everett Dirksen (R-IL), who served as Senate minority leader in the Lyndon B. Johnson era, used to say, “A billion here, a billion there, and pretty soon you’re talking about real money.”

In sum, it is safe to say America’s Essential Hospitals likely would not exist in its current form — indeed, many of the association’s members might not exist today either — without both reconciliation and bipartisanship. Nor would laws like the Emergency Medical Treatment and Labor Act, Children’s Health Insurance Program, or Medicare Advantage have been as easily enacted. In more recent years, of course, the reconciliation process has been used for more partisan purposes, including enactment of significant portions of the Affordable Care Act in the Obama administration with no Republican support and Trump-era tax cuts with no Democratic support. And now, again, it appears likely the process will be used to enact President Biden’s important $1.9 trillion COVID-19 relief package on a strictly party line basis, although there remains some hope for Republican support.

So, while the budget reconciliation process has recently become a highly partisan one, the Health Affairs writer believes the opportunity still exists over the next several years to move back in the direction of bipartisanship. I agree. It is therefore encouraging that, for most of its existence, America’s Essential Hospitals, as with NAPH before it, has benefited from strong bipartisan support — something I fully expect will continue to serve the association well for the next 40 years.

Larry Gage Gage founded the National Association of Public Hospitals (now America’s Essential Hospitals) in 1981 and served as its president for 30 years. He currently is a senior counsel at Alston & Bird LLP, in Washington, D.C., and a senior advisor to the consulting firm Alvarez & Marsal.