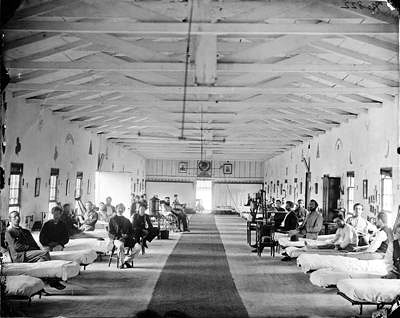 The American hospital as we know it today emerged over the course of about 60 years, beginning around the time of the Civil War. Physician-staffed hospitals, with professional nursing and specialized departments and services, were products of urbanization and economic expansion during the Second Industrial Revolution—together with massive immigration and rapid strides in medicine itself. About 1880, asepsis (sterilizing) opened broad new horizons for surgeons. As physicians looked to the future with a new sense of hope, hospitals became symbolic of their new optimism and authority.

Each of today’s public hospitals has a unique story, and many trace their origins to this historic period of growth. Some public hospitals were established originally by the work of states and counties, others by municipalities. Once established and staffed by trained physicians and nurses, public and not-for-profit hospitals became key components in a rapidly expanding medical culture.

By the 1920s, the hospital was a place where one could hope illness might be treated and even cured. Not-for-profit hospitals at this time began reducing their traditional charitable role in favor of creating prestigious institutions attractive to an upper middle class clientele. But public hospitals operated with their commitment to treat the poor and a consequent fiscal challenge.

All hospitals before the 1920s had operated without much money. Physicians donated their time, and costs for nurses and staff tended to be low. For the first time, hospitals required significant funds, just as doctors and surgeons began getting paid and nursing and staffing were professionalized. Many urban public hospitals recast themselves appropriately as major and, sometimes, highly regarded institutions, often establishing affiliation with universities and medical schools. At the same time, they remained committed to the mission of treating all, and they became ever more vulnerable in the marketplace.