Essential hospitals have long focused on caring for populations facing structural barriers to care. As the association celebrates its 40th anniversary, we’ve sharpened our focus on dismantling those barriers, with a particular concentration on structural racism. Susan Ehrlich, MD, MPP, CEO of Zuckerberg San Francisco General Hospital and Trauma Center (ZSFG), is the past-chair of the association’s board of directors. She reflects on her personal journey working toward health equity and what she’s learned from essential hospitals. 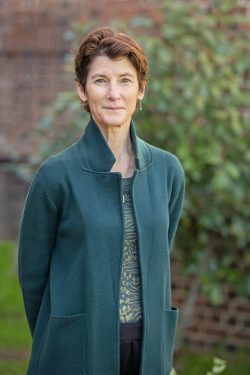 Susan Ehrlich, MD, MPP, is past-chair of the America’s Essential Hospitals board.

Emily Schweich: How did you get involved with America’s Essential Hospitals?

Susan Ehrlich: My entire career has been involved in the safety net, public hospitals, public health advocacy and policy starting when I left college back in the 1980s. One of my first jobs out of graduate school was working for the California state legislature in the Joint Legislative Budget Committee, in the Legislative Analyst’s Office. Back at that time, we were really encouraged to travel and see firsthand the operations of the budgets we were analyzing; what people out in the state were doing. Because I did health budgets, I visited a lot of public hospitals. It was around the time that [the National Association of Public Hospitals (NAPH)] was formed and [the California Association of Public Hospitals (CAPH)] was formed. All these iconic public hospital leaders were out there, and I was really interested in what they did. Through those early visits to public hospitals, I learned about NAPH and CAPH, obviously, and went to some of their meetings. Then I went on to work in the San Francisco Department of Public Health (SFDPH), and, while there, I became an NAPH fellow in the early 1990s. So, my experience with NAPH, and now [America’s Essential Hospitals] goes way, way back.

Schweich: What was the Fellows program like for you?

Ehrlich: It was a great experience. It was the first professional leadership program after graduate school that I was involved in. This was before medical school and after public policy graduate school, and so really for the first time I learned deeply what folks in other states and other hospitals were doing. It was a long time ago, but, ironically, my topic was the affiliation agreement between the Department of Public Health and the University of California San Francisco. As CEO of this hospital now, one of the major things that I oversee is that affiliation agreement. The document that I worked on and helped help craft — by the way, with [association founder] Larry Gage as the consultant to the department — is the same document we have now. It was written and signed in 1994. So, it’s very much on my mind all the time.

Schweich: What does the essential hospital community mean to you?

Ehrlich: Well, it means a lot. It’s really a common purpose across lots of hospitals in the United States, and I’m always really interested to learn about what other [essential] hospitals face. I was just on a governance committee call, and we were talking about places where there are relatively few vaccinated people and places that have more vaccinated people, and what the experience is like and what similarities we have and what things are different. I love learning about what my colleagues are doing and the kinds of challenges they face and the opportunities they take on. It helps me be a continual learner, which is something I aspire to, for sure.

Schweich: That’s great. I’m hearing in your responses that the association has helped you learn. Is that right?

Ehrlich: My experience as board chair was — I would say — a surprisingly fulfilling experience. I don’t know why I would be surprised, but I think maybe because when I started the year, I knew it was a pandemic, and I was regretful that — I suspected and I was right — I would be the board chair and I would never go to D.C., and I would never help advocate in the way that we had done all these years before. But it turned out to be an incredible opportunity to promote and lead work on diversity, equity, and inclusion, and to have the opportunity at a national level to be a strong voice against structural racism and reducing health disparities. That was an amazing opportunity for me, and I really enjoyed working with your team and Bruce [Siegel, association president and CEO] on all the work that happened during that year. It was a silver lining of the pandemic, that the disparities it shone a light on gave us the burning platform to do this work at the national and local level.

Schweich: We’re really grateful for your leadership on the diversity and equity work. You and ZSFG have long been champions of that kind of work. I wondered if you might be able to reflect on that a little bit as far as your personal journey and the association’s role in improving health equity.

Ehrlich: Well, there’s a really important link between those things, because one of the many things that I’ve done during my time here at ZSFG, specifically, is focus on my own personal equity journey. I’m completely convinced that those of us who are leading this work cannot do it effectively unless we really devote ourselves personally to deeply understanding what structural racism really is. That journey is going to be different depending on who you are: whether you are a white woman of privilege like me or if you are from a different type of background. Being in the San Francisco Department of Public Health and at ZSFG has really given me the opportunity to do that because equity is a core value for the City, the Department and my hospital and, as a result, there are a lot of opportunities to participate in trainings and learning. I believe this is a requirement for anybody who’s leading or doing this work.

At ZSFG, we started our work on equity in 2016, and that really gave us a good footing to then advance the work more recently and  following George Floyd’s death. Since then, it’s been at an increasing and more forceful pace. When we started in 2016, it was just a different time and there was a lot of suspicion about it, and there was a lot of fear about taking on the work. Fortunately, we had a lot of courageous leaders here who were not afraid to take it on and were willing to push. Now, I would say we’re working with the rest of the [public health] department in doing that work. We’ve got a lot of colleagues now who are doing it, and there’s a very robust Office of Health Equity at the Department of Public Health level. It’s been wonderful to work with them on this critical effort.

Schweich: Great. How has your experience been with the association-wide work on health equity? I know it’s looked different throughout the years. Can you reflect on that at all?

Ehrlich: I think it is interesting. I think the association is like the rest of the safety net world in some ways. We have always stood up for the underserved and the less privileged and have always provided care on behalf of that group and for that group primarily, and we’ve been spokespeople for that.

And we’ve long been advocates around disparities. I think about the Centers for Medicare & Medicaid Services star rating system and how the association advocated for changes in that system because of the disparities in the populations for which we care. We’ve advocated for decades for funding for disproportionate share hospitals because of the people for whom we care.

At the same time, I think it’s only really been recently that we’ve been willing to dig in and understand health inequities in our own systems and certainly within the association to see: what are we doing to address disparities? How are we taking a hard look at the way we govern ourselves, our own hiring practices, our leadership. We’ve just gone another level deeper on this.

Schweich: I think now we’re looking at it probably from a more systemic or structural perspective.

Ehrlich: Exactly, and that’s a really good point because I don’t think before the last year or two, the term structural racism was really in common parlance in the way it is now. We talked about health disparities for sure and inequities, but that idea of structural racism, I think, has become much more common and something that we recognize, we understand, and we’re working on. We’re changing the policies and practices to be antiracist.

Schweich: Is there anything else you’d like to share reflecting back on our anniversary and your time with the association?

Ehrlich: I feel really privileged to have been a part of NAPH, and now America’s Essential Hospitals, for so many years. I hope that the association has gotten something from my involvement, but I’ve definitely gotten a lot personally from my own involvement, and I know that the SFDPH and ZSFG have benefitted tremendously from the association over time. Thank you!