40 Years at the Center of Medicaid

What a long and proud history America’s Essential Hospitals has of shaping health care policy in our country in ways that make a direct and daily impact on patients’ lives.

I have had the honor and privilege of representing the association my entire career — 30 of the 40 years of history we now celebrate. I entered the practice of law — and my representation of the National Association of Public Hospitals (NAPH) — in late 1991, smack in the middle of what, in hindsight, turned out to be one of the most consequential policy “debates” (a kind way to phrase it) of the last half-century for essential hospitals.

The Health Care Financing Administration, now the Centers for Medicare & Medicaid Services, was attempting to use its regulatory authority to restrict states’ use of Medicaid disproportionate share hospital (DSH) payments and related financing mechanisms. States and governors were trying to protect their flexibility to use these funding mechanisms — though, frankly, some had figured out how to exploit them to draw federal funding into state coffers rather than to support hospitals.

Essential hospitals were caught in the resulting crossfire. DSH had become a critical source of support for the mission of essential hospitals in many states, but it was difficult to defend some of the more extreme (ab)uses of the program. Our job was to make sure the baby was not thrown out with the bathwater.

Thus launched NAPH’s (and my) work to convince skeptical policymakers to protect the health care safety net from devastating cuts to core funding that was crucial to survival. Supplemental Medicaid payments have never been easy to defend; they are complex, technical, and governed by an arcane set of often bizarre rules. They are necessitated by stubbornly low Medicaid base rates that lag far below reimbursement for commercial or even Medicare patients. Back in the early 1990s, we did not connect the problem to the systemic racism that has allowed such a two-tiered payment system to persist. We just knew the unthinkable impact on low-income communities — disproportionately composed of people of color — that would be inflicted by cuts of the magnitude originally contemplated in 1991 (and again in 1993, 1995, 1997, 2000, 2001, 2007, 2010, 2013, 2014, 2015, 2018, 2020 …). And we fought back. Hard.

After an epic showdown, Congress finally enacted legislation to resolve that 1991 debate, and NAPH achieved several very important policy victories that anchor the financial viability of many essential hospitals today. Intergovernmental transfers were not only preserved but were protected against future restrictions. Provider tax rules were negotiated that, though complex, have permitted 49 states to tap this important funding mechanism. And while DSH payments were capped for the first time, no state experienced a cut in DSH funding and many were permitted annual growth.

And so it goes. America’s Essential Hospitals, then and since, has been at the heart of every major Medicaid national policy debate, from DSH and supplemental payments, to coverage expansion, waiver policy, block grants, immigrant health, social determinants, value-based payment, delivery system reform, and disaster and pandemic response. Always a voice for the underserved, always humanizing complex policy calculations, always a trusted voice of reason.

I am proud to be a small part of this rich history. 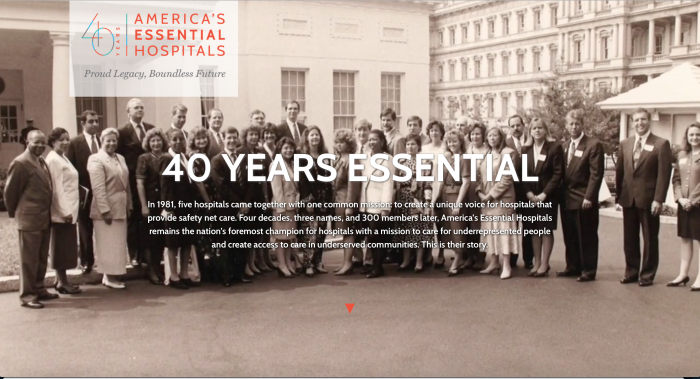 To learn more about the association’s influence on the Medicaid program and other important health care policies, visit 40YearsEssential.org.

0 responses to "40 Years at the Center of Medicaid"